At the corner of Gordon Road and Buckingham Road, West Sussex BN43 6WF.
Please go HERE for information on our Covid-19 policy .

Sundays 10:30 a.m. to 11:45 a.m.
We meet for Christian worship, prayer and an exposition of the Bible by our minister, Rev Peter Earle.

On the first Sunday of the month, we have a service incorporating Holy Communion. 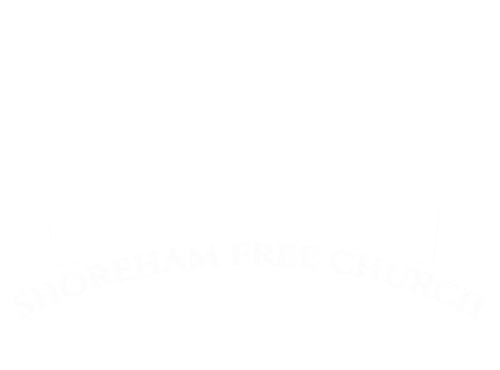 Shoreham Free Church is a growing and active Fellowship. We are focused on proclaiming the Gospel through informal meetings, Open Mornings and practical support, particularly through the housing of Shoreham’s Foodbank on our premises. People often comment on our friendliness and the welcome that they receive from us. Although we are small in number, we are big in heart! You would be very welcome to join us at any of our events and at our Sunday meetings.

Here at Shoreham Free Church, our Christian core value is mission. To this end, we strive to love God, love others and glorify our God and Saviour, Jesus Christ. We work towards our calling of making Christian disciples through the sharing of our faith, carrying out good works and being Christ-like to those we meet.

We are a member church of the Countess of Huntingdon Connexion which has historic connections with Sierra Leone resulting from The Countess’s quest to support the end of the slave trade. The Sierra Leone Mission (SLM) consisting of a network of churches in Sierra Leone, was born from this concern.

READ MORE
We are a member church of the Countess of Huntingdon Connexion, the legacy of which, is from arguably the most influential woman of the Evangelical Revival that swept England and America during the 18th century. Counting John Wesley and George Whitefield among her closest friends the Countess of Huntingdon was driven by a desire to share the Good News of Jesus Christ with her generation. By the end of the century in which she lived she had formed a Connexion of chapels and mission stations across the United Kingdom.

At that time, due to the Connexion’s concern over the plight of ex-slaves from America who were eventually settled in Sierra Leone, a network of churches in Sierra Leone collectively known as the Sierra Leone Mission (SLM) was gradually built up.

History of the our Connexion and the Sierra Leone Mission

Today the Connexion comprises 23 chapels in the UK and more than 30 chapels in Sierra Leone, as well as some 20 schools. We celebrate a rich heritage and like the Countess herself are committed to reaching our own generation with the Gospel. To do this we have a continuing vision to be a growing network of churches that are missional and led by the Holy Spirit. We hope you enjoy visiting our site and if you think you might like to join with us then please don’t hesitate to get in touch.

In September 1996, a plaque was dedicated in Westminster Abbey inscribed, ‘Thomas Clarkson, a Friend of slaves.’ At 150 years after his death this was a belated recognition of the prime-mover behind the abolition of slavery. Not Wiberforce, Macaulay or Granville Sharp: Thomas Clarkson was the biggest force and he devoted his life to the cause.

Of greater significance to the Connexion in his brother John, who assisted Thomas. John Clarkson worked for the rights of Black Loyalists who were settled in Nova Scotia at the end of the American War of Independence. They had fought with the British and were promised their freedom and lands. As John Clarkson campaigned for them, he attended their services: Methodist, Baptist and Humtingdonian.

The Huntingdonians were led by John Marrant, who was converted under George Whitefield of Charleston, wounded in the American War and discharged in London. Hearing of the lack of Christian leaders in Nova Scotia he asked the Countess to arrange his ordination (Bath 1785) and ministered there.

The settlers were discontented with the lack of land, the climate and local discrimination, and John Clarkson arranged to escort a group of 1196 volunteers, one third of the black population, to a new life in Sierra Leone, where they arrived in March, 1792.

John Clarkson became the country’s first Governor, and the Huntingdonians established churches and took root. After 200 years of growth, the number of churches has risen from 12 to 18 in recent years. They are all situated in the peninsula area near to the coast.
By Kenneth B. Stone, taken from ‘Voice’, the magazine of the Connexion, December 1996, originally entitled ‘The Countess of Huntingdon’.

The Republic of Sierra Leone, a country slightly smaller than Scotland, is situated on the coast of West Africa, less than ten degrees north of the equator. It was given its name by the Portuguese explorer, Pedro da Cintra, possibly because he thought thunderstorms over the mountainous peninsula on which Freetown, the capital city, now stands, sounded like the roar of a lion. By 1787 the surrounding area had come under the control of the Sierra Leone Company, the first of several British administrations. The country later achieved independence in 1961, and became a Republic ten years later.

Sierra Leone’s terrain varies from the mangrove estuaries on the coast, to a wide belt of lowland stretching inland to a central, forested area that climbs to a highland plateau in the north and east. There are two fairly distinct seasons; the dry being from November to April, and the wet from May to October.

The population of Sierra Leone is estimated to be over 4 million. This includes more than 17 identifiable groups; the most numerous being the Mende and the Temne.

Creole people, the descendants of freed or escaped slaves from North America and the Caribbean, are fewer in number but the language they developed, ‘Krio’, is now understood throughout the country. English, however, is the official national language. Most people follow traditional African religions, often combining them with Islam, which is the largest religious group, or Christianity.

Sierra Leone is a country with valuable raw materials – diamonds, gold and rutile (titanium ore) – excellent hard wood forests and a potentially wealthy agricultural sector. Although Sierra Leone is exposed to some environmental excesses, the country is thankfully not prone to the devastating droughts and famines experienced in other parts of Africa. Despite all this, there is desperate poverty throughout the country, as a result of depressed commodity prices, smuggling, corruption and poor economic management. In the 1990’s, Sierra Leone sank to bottom of the 174 countries ranked in the United Nations Human Development Index. The lack of government finance has resulted in poor health care, education and agricultural support services throughout the country. In the early 1990’s, the civil war in neighbouring Liberia added to the strains imposed on the already devastated economy. In April 1992 a coup was followed by nearly four years of military rule, during which time fighting spread to most parts of the country and over a million people became displaced from their homes. In early 1996 a civilian government was elected, but was overthrown in May 1997. ECOMOG peace keeping troops forced the junta out of Freetown in February 1998, but atrocities continued as the rebels terrorised the population and the country plunged into even worse chaos and suffering.

The country’s infrastructure is very poor. The electricity supply in the capital city has been erratic. The roads are rutted and often impassable in the rainy season. Spares for vehicles are very expensive and usually difficult to obtain. Public transport is very limited, so the most common way to travel is by buying lifts on lorries and vans, although in the main towns shared taxis and ‘poda-poda’s’ (overcrowded minibuses) are also available. Education and health care facilities are extremely limited. The country has by far the highest infant mortality rate in the world, and one of the lowest adult literacy rates (less than 30%). It is estimated that only 20% of the rural population has access to health services, and over 60% of the people do not have access to a safe water supply.

The Countess of Huntingdon Connexion

The Countess of Huntingdon, Lady Selina Shirley, was part of the 18th Century Evangelical Revival which gave birth to Methodism, and giving up her entire fortune she raised money to pay for ministers to preach the gospel, mainly in England and Wales. She also sent ministers to the United States where they came into contact with Negro slaves, who were converted to Christianity, and after helping the British fight in the American War of Independence, were promised their freedom. After an unsuccessful attempt at settling them in cold, inhospitable Nova Scotia, the British Government agreed to give them passage to West Africa, where some 1196 of them landed in what is now Freetown, on March 28th 1792. About half of them were ‘Huntingdonians’ and they kept the name of the church to which the ministers who had preached to them belonged. The English church was totally unaware of their existence for some years. Eventually a link was established, with the formation of the Sierra Leone Mission, and has been maintained in various ways ever since. The Huntingdon Churches in Sierra Leone celebrated their bicentenary in 1992 with a procession through the streets of Freetown followed by a rally and many other celebrations.

The war has hampered the Connexion’s plans at outreach into the largely Muslim dominated country further east, but with the return of stability to the country, attempts can recommence.

The government is unable to provide sufficient schools, so many village communities rely on outside agencies to assist. The Huntingdon Connexion in Sierra Leone operates some seven primary and one secondary school on the Freetown peninsula, with plans for expansion into the interior of the country dependent on cessation of the rebel war in the ‘provinces. The S.LM. helps with the primary schools, providing tome materials, and assisting with the payment of many of the teachers’ salaries. A number of individuals or churches and schools in the U.K. sponsor these teachers. Government salary scales dictate that a typical teachers salary at current rates of exchange is around £25 per month. Some church members in the U.K. have also taken a special interest in helping the Milton Margai School for the Blind, in Lumley, a suburb of Freetown, where some sixty blind children were living in extremely poor conditions.

Buildings in Sierra Leone require constant attention due to the climate. The people are poor and many are unemployed, which means that they have difficulty in finding the money to pay for building work, so the S.L.M. has assisted in funding a number of improvements to the churches and schools. The S.L.M. is also concerned to assist with housing for the Ministers and has provided finance to construct one Manse with plans already in hand for others.

The importance of good Biblical teaching in the churches cannot be overemphasised, and the U.K. supports a number of students in theological training, at Sierra Leone Bible College in Jui, or at Theological Hall in Freetown. This includes payment of fees and assistance towards stationery and books.

The S.L.M. also gives some support to other evangelical organisations in Sierra Leone, including Scripture Union, the CLC Bookshop in Freetown, and the Evangelical Fellowship of Sierra Leone (EFSL).

We support this Hove based charity for homeless people and for people at risk by providing storage space. Please see offthefence.org.uk for further information.

Shoreham Free Church is part of Shoreham Churches Together.